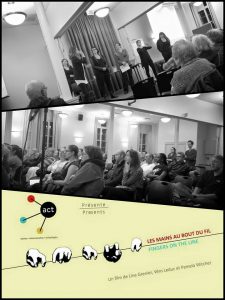 Ageing is too often devalued and associated merely with decline or loss of autonomy. In a similar way, deafness is generally considered as a lack or incapacity. However, many people who self-identify as Deaf are proud to belong to a community and to share a distinct culture through one sign language or more. Fingers on the line explores the intersections of ageing, technologies and Deafhood by focusing on the points of view of four Deaf seniors signing in Quebec Sign Language and American Sign Language.