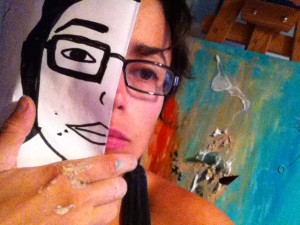 Tiphaine Girault is a passionate artist. She graduated with a Bachelor of Arts in Comic Strip creation and design (bande dessinée) from the Université du Québec en Outaouais. She makes printmaking media. Tiphaine has delivered several workshops on comic strip creation, design and illustration, notably at the National Arts Museum. She participated on the Canadian Council for the Art’s committee on Deaf and Disability Arts. Tiphaine was involved on the curatorial committee for the City of Ottawa arts exhibition “Perceptions” in 2011 that was open to deaf artists and to the general public.  Tiphaine wrote and performed an LSQ poem entitled “Rien n’est Impossible” that was later produced as a video and screened at the Toronto International DEAF film & Arts Festival in Feburary 2010.

Tiphaine has also presented on the topic of Deaf culture and the arts to several companies and organizations such as the National Film Board of Canada (2011) and the National Arts Gallery (2011). Tiphaine was the head of the set design and construction team for SPiLL’s production of “Yvon Kader – des Oreilles à la lune” presented at La Nouvelle Scène in Ottawa, Ontario (2012). Tiphaine has been working on a series of set design projects with the Ottawa Little Theatre. Tiphaine has been selected, as a Deaf artist, to participate in a documentary filmed produced by the National Film Board of Canada, Les mots qui dansent. She is Executive director of SPILL PROpagation, a no-profit organization for artists who use sign language since 2013.

Description about my artwork:  Moon

How i made this? I was inspired by one Artist, Jonathan Poulin-Desbiens. He did describe in sign language about his relation with the moon. I did translate this in visual image. I used wood and printmaking.