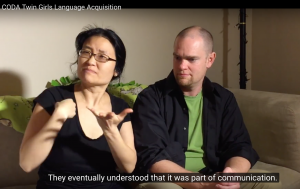 This film documents the acquisition of language by twin toddlers who are children of Deaf Adults. (CODAs). It was assumed that their first language would be spoken English because of their hearing status. Jazmina and Izabella instead acquired American Sign Language (ASL) as their first language while Spoken English is their second language. The film shows how their expressive and receptive skills have changed over the course of their early years.