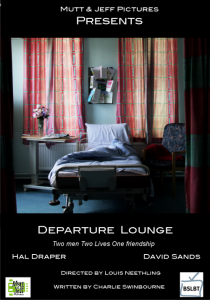 Departure Lounge is a celebration of the friendship and deaf solidarity that develops between Sid, an ailing older man and Matt, a young hospital cleaner. Sid is angry, frightened and isolated. Neither his doctors nor his wife, Morag, seem able to help or comfort him. Matt, is also frightened and uncertain – he has a partner, Jill, and a baby, but Matt is running away from his responsibilities. It is their deafness that creates the initial bond between the two men. Matt breaks down Sid’s isolation by taking him up on to the roof of the hospital and together they create a sort of deaf club in the sky. Here they sit and talk, fall out and make up, speculate on the wonders of a deaf heaven, and slowly come to realise that, despite everything, each can give courage to the other.