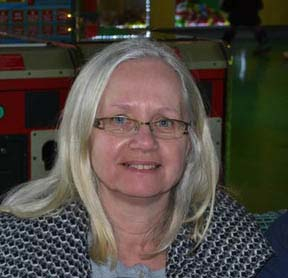 Artist Biography: Patricia was born in Grimsby, Ontario and has two sisters. She grew up on a farm and entered the provincial school for deaf students in Belleville, Ontario in 1959. She was among the first students transferred from Belleville to attend the provincial school for deaf students in Milton, Ontario when it first opened in April 1963. She remained a student there until she graduated in 1973. It was at the deaf school in Milton where Patricial Wisnoski met William Hall whom she married and with whom she has two children, 4 grandchildren and another grandchild on the way.

Patricia worked for John Deere Ltd. for 10 years until they moved to Nova Scotia and settled. She worked for General Insurance, Douglas and Rogers Insurance and Halifax ING Insurance. She also worked as a facilitator for the Atlantic Provincial Service Education Association (A.P.S.E.A.) with a deaf student for 5 1/2 years in Sackville, New Brunswick and then with another deaf student for 2 years in Oxford, Nova Scotia. Textiles and cooking are among her hobby passions!