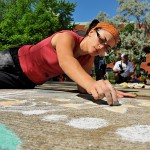 Artist Biography: Tiphaine Girault was born in France in 1984. She moved to Quebec in 1998, where she has lived in Gatineau since. She studied comics for three years at the University of Quebec in Outaouais. She has created several illustrations for children’s books for Regroupement des parents et amis des enfants sourds et malentendants franco-ontariens (RESO) and the Centre Jules-Léger. She also volunteers creating illustrations or cartoons for newspapers such as the Association of Hearing Outaouais, See-Say (newspaper for the deaf in Montreal), and for writers seeking illustrations for children’s books. She has taught comics at Centre Jules-Léger and to hearing youth at the Museum of Fine Arts of Canada in Ottawa. She also participated in the artist contest to Macadam Flower, where she distinguished herself by winning first prize in 2007. She is director of présentatement for SPILL.PROpagation.