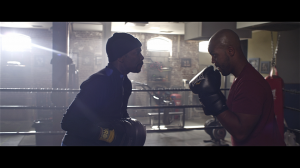 James Deacon Jr, the deaf son of a once-promising boxer, struggles to escape his father’s shameful legacy while raising a son of his own after a personal tragedy. When he crosses paths with a boxing trainer and former rival of his father, he faces the agonizing decision to either run from his past or leverage his inherited set of skills to become the champion his father never was.