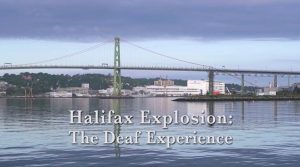 On December 6, 1917, the collision of two ships in the Halifax Harbour ended up creating one the biggest explosions in human history. The City of Halifax was immediately devastated with 1,600 people killed almost instantly and over 9,000 injured. The very next day, powerful blizzards sweeping through the region deposited deep snow, and leaving many survivors exposed to extreme cold.

The Halifax School for the Deaf was in the path of the explosion. Yet unlike many buildings that were flattened in the blast, the School was left standing. Despite windows being blown out and doors flying through the air, all the people inside the school survived. Despite the extreme cold and high snowfalls the next day, all the people still survived.

There have been many books written and movies made about the 1917 Halifax Explosion and its aftermath. But what about the Deaf community and the School for the Deaf? This is an amazing story that remains largely untold, until now.

Jim McDermott leads us through the tragic impact of the devastating 1917 Halifax Explosion, the importance of the Halifax School of the Deaf, and how everyone in the school survived the Explosion. Amazing stories of family, community, survival and heroism will be shared in American Sign Language and Maritimes Sign Language.

It is now time to share those stories with everyone.