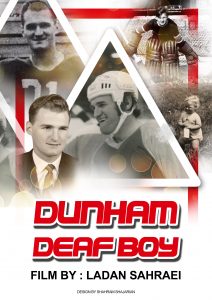 Patrick and Margaret Fee immigrated to Montreal from Farmaugh County, Ireland in 1925 and trekking with horses’ wagon trying to cross the USA border but got stranded 20 miles before the border due to birth of their 5th child. They settled in small town in Quebec. Ronald was 11th out of 12 siblings. He was sent to Mackay School for the Deaf at age of 7 and he left at age of 16 to help father to run the farm.  While he was spending his youth there he joined the community hockey as he already played hockey at MacKay. He was pulled out of hockey to work as Furniture polisher for Vilas Industries Ltd then to Cowansville Vics Team in Intermediate league and he moved on to play fastball for Vilas team for two years. He was also asked to tryout with Brome Missisquoi Bombers football in 1959 and made the team as defensive end. Coach Glen Brown switched him to play as middle guard.  Ronald was invited to try out at football camp in Granby, Que for Montreal Alouettes.

He visited to West Coast with his pals from Mackay in 1960 where he met his future wife, Peggy Brooker and they settled in Vancouver, BC. They celebrated their 50th wedding anniversary last June 26, 2014 with 220 guests.