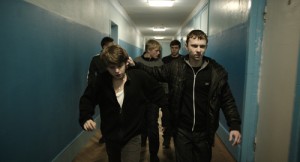 Teenage Sergey (Grigoriy Fesenko) , a new student at the boarding school, realizes immediately that he must prove himself worthy to be brought under the protective wing of the school gang’s leader to survive unscathed. After going through a series of harmless initiation pranks and rites, Sergey’s new-found clique soon introduces him to their common activities of robbery, bribery and prostitution. Assimilating seamlessly into his new role in the tribe, he compromises his position when he starts falling in love with his female classmate —and one of the gang’s escorts —triggering a series of stunningly diabolical events. **Winner of multiple Cannes Film Festival Awards-2014.