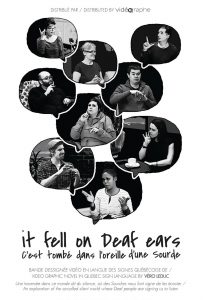 Turning a deaf ear, Preach on deaf ears, Are you deaf or what?… Just as these expressions stigmatize the word “deaf”, Deaf and hard of hearing people struggle to be fully recognized even though they make up between 10% and 25% of the Quebec population.

Because Quebec Sign Language (LSQ) cannot be captured on paper, videography has revealed itself to be the best way to represent this visual language. It Fell on Deaf Ears, the first graphic signed novel entirely recorded in Sign Language, presents encounters with Deaf and hearing people and shares an exploration of the so-called “silent world” where Deaf people are signing us to listen.