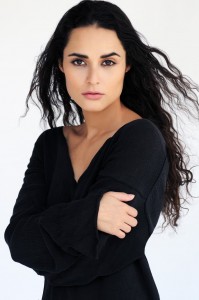 Stephanie Nogueras is Actress and Model of Puerto-Rican descent. She is profoundly Deaf and fluent in American Sign Language. Nogueras was born in Camden, New Jersey but grew up in Frederick, Maryland for a better education. She graduated from Rochester Institute of Technology/National Technical Institute for the Deaf with a degree in Liberal Arts in 2011.

Stephanie Nogueras is best known for her role as “Natalie Pierce” on Switched at Birth (2012-present). She was discovered in her Senior year in college by Deafinit Models & Talent in Los Angeles, CA and was offered a model management contract. After graduating, she left her home on a New Jersey farm for a life in the big City of Hollywood. Within six months, she landed a recurring role on ABC Family’s SWITCHED AT BIRTH in Season 2. The Show’s Season 4 finale episode “There Is My Heart” (#4010) was inspired by an actual event in Nogueras’ life. In 2013, she guest starred as “Elly Mahario,” a ‘Deaf Naiad’ on NBC’s Cop Fantasy Show GRIMM (Season 3). In an interview about her role on the show, Nogueras told PEOPLE Magazine “There’s Nothing in My Life That Would Limit My Ability to Succeed” (November 2013). She has quickly become a Role Model, as her commanding presence in the public eye has been inspiring for both Deaf and Hearing people alike. Nogueras actively raises funds for a Deaf School in Puerto Rico, serves the Homeless at “The Union Rescue Mission” and with “My Friends LA,” volunteers at “Best Friends Animal Society” and “Dogs for The Deaf” and is an annual #Spirit Day Celebrity Ambassador for “GLAAD.” She is also an accomplished Hair & Petite Model with three Magazine Covers to her credit.