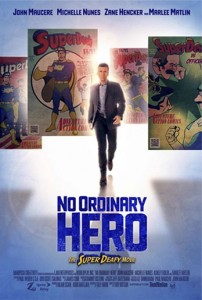 SuperDeafy must reveal the man behind the cape to find true love and inspire a young deaf boy to believe in himself. The movie follows the evolution of this unique hero. A beloved character and role model, SuperDeafy has a world wide following. This film marks the first time in cinematic history, that SAG-AFTRA commercial feature film has been executive produced exclusively by deaf producers and directed by a deaf director.