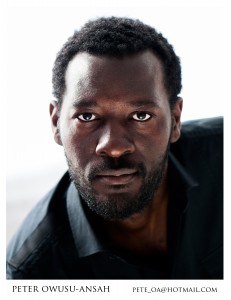 Peter Owusu-Ansah is hard of hearing, born in Ghana in 1979.  He moved to Canada in 1994.  Peter became interest in visual art at the age of 25.  He practice seeing a a lot of artworks by other people and attempted to create art from that experience. Peter’s work is not limited to what he may find in visual appearing to him, he photographs; he paint; he creates pop arts and pixel arts.

In photography, Peter took a part of master class with Vincenzo Pietropaolo in 2012.  The master class lead to Toronto Street Level, a group show, Which was presented in September 2012.  It also had been presented at Ryderson University in 2013 and recently at Kings College in London.  Currently, Peter is a part of photography group show at Urban Space as a part of Strange Beauty hosted by Tangled Art.  I am also creating a mural color grid painting.